Feelings and Emotions Vocabulary and Sentences

Every morning, Sam is so enthusiastic to begin his day that he jumps out of bed and begins to sing.
His mother became worried when she didn't hear from him for two days.
David is quite shy so he doesn't like talking to people he doesn't know.
A year after being fired from his job, Alan is still very bitter. He has a lot of resentment towards his former boss.
Even though I am accustomed to traveling for business, I still get homesick if I am away from my home for more than a week.
Katie feels threatened every time her boyfriend talks to another girl. She thinks that every girl wants to steal him.
In the U.S., Thanksgiving is a holiday in which people give thanks for the blessings they have. Before the Thanksgiving meal, family members will say what they are thankful for.
I am absolutely furious!! I cannot believe that my dog chewed my favorite shoes. Now they're ruined!
Cats are so curious that they often get into trouble. Once, my cat fell into the bath tub because she wanted to know what was inside! 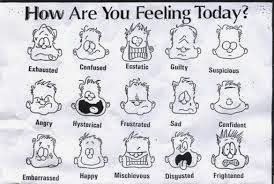 When Dave found out that the plumber charged him double the normal amount to fix his toilet, he felt cheated.
After his grandmother passed away, Ken was so grief-stricken he couldn't get out of bed.
When Emily has a lot of work to do and feels stressed, she becomes very tense and cannot relax.
Our friend Lily makes us feel left out when she has a party but doesn't invite us.
Even in hard times when I don't have a lot of money, I stay hopeful and believe that next month will be better.
My aunts enjoy inviting me to their romance book club. I always feel trapped because I don't want to hurt their feelings by saying no, but I also don't want to go and listen to sixty-year old women talk about romance.
As a teenager, Alexandra liked to be rebellious and defy her parents. She used to sneak out of the house after her parents fell asleep to go to parties.
When I see that puzzled look on your face, I know that you didn't understand my question.
Mr. and Mrs. Porter are very cautious about answering their door. If they are not expecting a visitor, they won't open the door.
Wow! I'm really impressed that Ashley can speak 7 languages, whereas I only speak one!
Ugh! I don't have anything to do. I'm so bored!!
It's difficult to not become discouraged while looking for a job, especially when you hand out your resume to employers and no one calls you.
After Kylie had her heart broken by her ex-boyfriend, she felt so down and blue. I tried to cheer her up, but she just wants to be sad for awhile.
In many countries, American-style business tactics are perceived as too aggressive.
American businessmen don't want to waste time talking about anything that doesn't pertain to business. In Asia, for example, a slower, more personal approach to doing business is preferred.

Affectionate children always want to be held in their parents' arms and receive lots of hugs and kisses.
He felt invincible and was sure that nobody would beat him.
When I found out that Santa Claus wasn't real, I was so disappointed that all of the presents really came from my parents and not the North Pole.
Craig felt uncertain as to whether he should accept the attractive job offer or keep his current, less glamorous job. He just wasn't sure what to do.
Grandpa was very proud of me when I got a promotion at work. He took me out to dinner to celebrate.
When Eve handed Adam a shiny, red apple, he felt tempted to taste the delicious-looking fruit.
Kelly is so indecisive that she couldn't make a decision if her life depended on it!
I'm a little doubtful about whether to get married or not.
The cowardly dog refused to leave his hiding spot underneath the bed to help his owner investigate the strange sound outside.
We are delighted that you will be coming to visit us. It will be so nice to have you here.
The actors were humiliated by the newspaper critic's review of their new movie. The respected critic said the film was as pleasant as week-old garbage rotting in the sun.
After waiting in line for an hour at the bank, the woman grew impatient and left.
Ebenezer Scrooge was a stingy old miser who never shared his wealth with anyone.
The stubborn employee refused to accept that he made a mistake. He kept insisting that he wasn't wrong.
Patrick felt quite awkward going to his ex-girlfriend's wedding. He thought maybe shouldn't go since it could be uncomfortable to see her again.
My mother came home exhausted after working a 12-hour shift at the hospital. She went straight to bed.
Carrie didn't feel satisfied with the report she wrote. It needed to be perfect to present it to her boss, and it was still missing quite a few details.
Her husband is so moody that she never knows if he will be happy or angry when she gets home from work.
I am anxious to hear back about the job interview I had on Friday. I hope I get the job!
After his wife left him, he was so miserable that he stopped shaving, gained 20 kilos, and didn't leave the house for weeks at a time.
It's said that children without siblings grow up to be selfish adults because they never learn to share with others.
They were shocked to learn that their beloved neighbor, Miss Ann, had stolen their car. She was such a sweet, 90-year old lady.
Jamie was in a bar with his friends one night when he saw a beautiful girl. He felt confident that night so he went to go talk to her. Unfortunately, he returned to his friends within minutes feeling rejected after she refused to talk to him. Poor Jamie.
Walking to the bank to deposit money makes me very uneasy. I'm always scared someone is going to rob me.
Nothing makes me more upset than when I fail my exams. I feel depressed the rest of the day.
Many times, co-workers feel burdened with the task of covering the mistakes of their irresponsible colleagues.
In case of an emergency, stay calm and move toward the exits.
Once, I got a horrible haircut that left me looking I got electrocuted. For months, I felt self-conscious about going outside my house. I swear everyone was laughing at me.
I don't feel energetic right now, if fact I feel quite lazy and I don't want to do anything.
Maggie is a fearless friend of mine. She will try anything once, no matter how dangerous the activity is.
Although the storm destroyed many of the buildings along the shore, we feel fortunate that our house didn't suffer any damage.
I'm concerned about Gregory. He has been very withdrawn from the rest of the world ever since he lost his job.
Allison broke up with her boyfriend because of his jealous behavior. He never let her talk to other men and always screened her calls.
<iframe frameborder="0" margin margin scrolling="no" src="//ws-na.amazon-adsystem.com/widgets/q?ServiceVersion=20070822&amp;OneJS=1&amp;Operation=GetAdHtml&amp;MarketPlace=US&amp;source=ss&amp;ref=ss_til&amp;ad_type=product_link&amp;tracking_id=leaengtea-20&amp;marketplace=amazon&amp;region=US&amp;placement=B00JG8GOWU&amp;asins=B00JG8GOWU&amp;linkId=AR4EI3UP3E3TPN5D&amp;show_border=true&amp;link_opens_in_new_window=true" >
</iframe>
<iframe frameborder="0" margin margin scrolling="no" src="//ws-na.amazon-adsystem.com/widgets/q?ServiceVersion=20070822&amp;OneJS=1&amp;Operation=GetAdHtml&amp;MarketPlace=US&amp;source=ss&amp;ref=ss_til&amp;ad_type=product_link&amp;tracking_id=leaengtea-20&amp;marketplace=amazon&amp;region=US&amp;placement=B00IOY8XWQ&amp;asins=B00IOY8XWQ&amp;linkId=FU6JT36BNNWYUZRV&amp;show_border=true&amp;link_opens_in_new_window=true" >
</iframe>
<iframe frameborder="0" margin margin scrolling="no" src="//ws-na.amazon-adsystem.com/widgets/q?ServiceVersion=20070822&amp;OneJS=1&amp;Operation=GetAdHtml&amp;MarketPlace=US&amp;source=ss&amp;ref=ss_til&amp;ad_type=product_link&amp;tracking_id=leaengtea-20&amp;marketplace=amazon&amp;region=US&amp;placement=B00KC6I06S&amp;asins=B00KC6I06S&amp;linkId=G5SH25PHR5SLXHFR&amp;show_border=true&amp;link_opens_in_new_window=true" >
</iframe>


- The Difference Of To - Too - Two In English
The Difference between Two, Too and To is frequently confused in English, sometimes even for native speakers.Sometimes To, Too and Two can all be used in the same sentence. While they all sound the same,...

- Conversation Starter Questions (ice Breakers) Part 2
Childhood Questions  ? What was your favorite children's book? ? What is your first childhood memory? ? What type of kid were you (e.g. spoiled, rebellious, well-behaved, quiet, obnoxious...)? ? What is one thing you miss about being a kid? ?...