Kazi Nazrul Islam
Kazi Nazrul Islam was born on the 25thMay in 1899. He is popularly known as a rebel poet. He was the first to make poems talking about intense spiritual fight against all types of social oppression. Nazrul is the national poet of Bangladesh. He is also remembered in India. He was born into a Muslimfamily in India, Nazrul received religious education. He worked as a muezzinat a local mosque. He learned of poetry, drama, and literature while working with theatrical groups. After being in the British Indian Army, Nazrul made himself a journalistin Kolkata. He was against the British Raj in India. He talked about revolution through his writings. Some examples are Bidrohi in 1922 which remains his most famous work, Agni Bina in 1922, Bisher Bashi in 1924 as well as his publication Dhumketu in 1961. 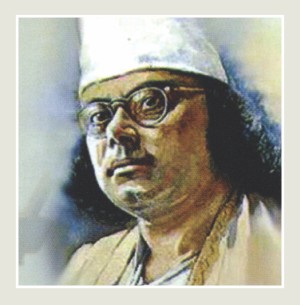 His work in the Indian Independence Movement often led to going to jail by British authorities. While in prison, Nazrul wrote the "Rajbandir Jabanbandi". Nazrul's writings are about themes such as love, freedom, and revolution. He was against all bigotry, including religious and gender. Throughout his career, Nazrul wrote short stories, novels, and essays but is best known for his poems. He started new forms such as Bangla ghazals. Nazrul wrote and composed music for his nearly 4,000 songs. In 1942 when he was 43 years old, he began to suffering from an unknown disease. He was losing his voice and memory. It is often said, the reason was slow poisoning by British Government. He lived alone for many years. Invited by the Government of Bangladesh, Nazrul and his family moved to Dhakain 1972. He died four years later on the 29th August in 1976.
Md. Saiful Alam
B. A. Honours and M. A. in English
Lecturer in English
Queen?s College, Dhaka
E-mail: [email protected]

My Affectionate Readers,
Please, never hesitate to comment because your comment inspires me much. Moreover, any correction or suggestion regarding my writings will be largely appreciated and valued and you can ask me any grammatical questions regarding English. I promise I would try my best to assist you, all. Thank you very much.


- Proper Treatment Of Bangaladesh
>>Hapless Bangladesh, help her!<<Bangladesh at her 45 looks shabbier than her age as she is diagnosed with fatal maladies that require treatment but there is hardly any doctor who came forward to provide proper and prompt treatment or any...

- Ir. Soekarno
Aulia Zahroh Ayuningsih 120221414947  Our country has gotten its independence for 67 years. This cannot happen without somebody?s service. Do you know them? Ir. Soekarno is one of independent heroes. He was born on June 6th 1901 exactly in Blitar,...